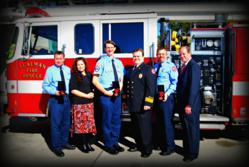 Half of all autistic children wander and more than one-third of those children are unable to communicate their name, address or phone number. To combat the fear and anxiety families experience should their loved one with Autism wander, MedicAlert Foundation offers medical IDs supported by a live 24/7 emergency support network. MedicAlert Foundation praised three firefighters from the Lealman Fire District for their coordination and honored in safely returning a MedicAlert member with autism who had wandered away from home.

Acting Lieutenant Ronald J. Neuberger, who was recognized at the ceremony, described the firefighters actions after receiving a call to evaluate a lost child. She was autistic and could not tell us anything at all. She was wandering around a fairly busy road. She had on a MedicAlert ID band and we were able to call MedicAlert and locate her home. If it were not for the MedicAlert ID, we might not have been able to locate her home as quickly and this could have put more stress on the child. When we returned the child home, I explained to the parents that we were able to get her home due to the band she was wearing. We were relieved when we were told that she never leaves home without it.

During last weeks ceremony at the Lealman Fire District, MedicAlert President and CEO, Andrew Wigglesworth, presented the Foundations Extraordinary Meritorious Service Award to Acting Lieutenant Neuberger, Paramedic Brian Barnes and Firefighter/EMT Randy Groves. Wigglesworth applauded the three firefighters for recognizing the MedicAlert ID and immediately contacting MedicAlerts emergency response team for the members medical history, emergency contacts, and identification. Our member had wandered away from home and thanks to these firefighters quick response, the MedicAlert emergency response team was able to work with these firefighters to communicate with the members family and safely reunite the member with loved ones said Wigglesworth.

According to a recent survey from the Interactive Autism Network (IAN), wandering was ranked among the most stressful behaviors by fifty-eight percent of parents. Sixty-two percent of families of children who wander were prevented from attending/enjoying activities outside the home due to fear of wandering, and forty percent of parents had suffered sleep disruption due to fear of wandering. Families dealing with autism have a real need for peace-of-mind and security; Christine Goulbourne, representative for the Autism Societys Florida chapter, emphasized this point at the award ceremony. Parents and family members of individuals with Autism share a common fear, and that is we are never truly at peace in the absence of our child or loved one with Autism, said Goulbourne. We worry about whether or not theyre being cared for, protected, or treated fairly. If they go missing, that worry is amplified by an agonizing terror. A child with Autism that is unable to communicate effectively will wander for hours or days if unfound; they will not recognize signs of danger.

The IAN survey states that two in three parents report their missing children had a close call with a traffic injury. As the mother of a child affected by Autism, Goulbourne highlighted the seriousness of this specific wandering event in which a traffic injury was thwarted. This story could have ended tragically, but it didnt, she said. The heroic and collaborative efforts of the MedicAlert team and these three courageous respondents, their strict attention to detail and awareness of this extremely special circumstance, safely reunited a lost child with Autism with her family.

Established in 1956, the nonprofit MedicAlert Foundation pioneered the use of medical IDs and delivers the most dependable, the most responsive, the most intelligent and the most trusted Emergency Identification and Medical Information Network. MedicAlert provides the functionality of an e-health information exchange through an innovative combination of a unique patient identifier linked to a PHR and a live 24/7 emergency response service. MedicAlert Foundation medical IDs alert emergency personnel to a members primary health conditions, medications or implanted medical devices. In addition to its 24-hour emergency response service, MedicAlert Foundation International also provides family and caregiver notification so that members can be reunited with their loved ones. Visit http://www.medicalert.org for more information.