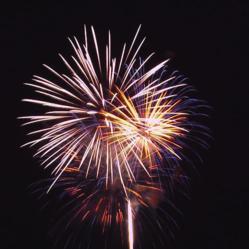 Prevent Blindness America warns the public about the potential danger of fireworks. Injuries from fireworks can have a severe impact, even affecting lives years after the accident.

Back in 1997 when Colin Burns of Chicago was in the 5th grade, his life changed when shrapnel and gunpowder from a firework that someone else lit, destroyed his left eye. To make matters even worse, Burns was already being treated for amblyopia, or lazy eye. The accident caused him to replace his good eye with a prosthetic eye and he then needed to rely on his weaker eye to compensate. Burns endured multiple surgeries over the next few years, including one where doctors moved tissue from his bottom lip to his eye socket to help fill up space. Because the risk of injury to his right eye was too great, he was not able to play in organized sports growing up.

Despite his injury, Burns accomplished tremendous amounts, including recently graduating law school. However, the lingering effects of his eye injury have made many activities, including driving and reading, more difficult.

Of course as a child, I didnt fully realize how important healthy eyes were until my accident, said Burns. I hope my story will serve as a reminder to everyone, especially parents, on how dangerous fireworks can be.

Last year, the U.S. Consumer Product Safety Commission (CPSC) stated in its annual report that there were an estimated 8,700 injuries treated in emergency rooms in the United States, with the majority of those around the Fourth of July holiday.

Of those injuries, 12 percent, or 600, were to the eyes. And in most cases, including Colins, bystanders are more often injured by fireworks than the operators themselves. In fact, last year there were 100 eye injuries reported from viewing public fireworks displays.