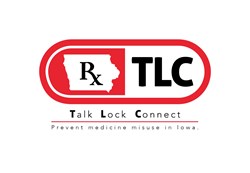 The improper use of medicines is the fastest growing form of substance abuse in Iowa. Teens are more likely to misuse or abuse prescription or OTC medicines than illicit drugs due to the ease of access to prescription medicines, according the 2012 Partnership Attitude Tracking Study (PATS). More than four in 10 teens nationally who have misused or abused a prescription drug say they took it from their parents medicine cabinet.

Iowa parents must be informed of this dangerous and growing problem and start taking the right steps to protect their teens from prescription and OTC medicine misuse and abuse, said Emily Blomme, program manager, Iowa Substance Abuse Information Center. Prevention starts with talking with your teens, securing these drugs and connecting with our center for help and to learn more. Iowa Medicine TLC is a new kind of TLC we encourage all parents to give to their teens.

Many parents may not realize that prescription and OTC medicines, when misused, can be just as dangerous or deadly as street drugs like heroin or cocaine. According to the most recent data available from Centers for Disease Control and Prevention (CDC) study, more Americans die of drug overdoses than car crashes. The study showed that 60 percent of these overdoses were from prescription drugs and 74 percent of the overdoses were unintentional.

Mary Patch of Dubuque, Iowa, knows firsthand that it only can take the misuse of three prescription pills to take your childs life. Patch was the guardian of her niece, Vanessa, who died in 2007 of an accidental overdose of prescribed medicinestwo antidepressants and one painkiller.

Since Vanessas death, teen prescription abuse has been on the rise. According to PATS, one in four American teens reported having misused or abused a prescription drug at least once in their lifetime, which is a 33 percent increase from 2008 to 2012. Iowa has had one of the lowest self-reported rates of prescription drug misuse in the pastwith only 6 percent of Iowa 11th graders reporting to have used prescription drugs for non-medical purposes, according to a 2012 Iowa Youth Survey.

Although teen self-reporting is lower in our state, other indicators are showing a steep rate of increase of prescription drug misuse and abuseand this has us very concerned, said Steve Lukan, director, Iowa Office of Drug Control Policy. During the last decade, the number of Iowans age 12 or older treated for prescription pain reliever abuse has increased more than 250 percent, and overdoses due to pain medicines have increased 1,200 percent.

Taryn Erbes, a 17-year-old Kennedy High School student, was a good student, involved in extracurricular activities like track and wrestling. She was introduced to prescription pain relievers, including the opiate Oxycontin, and the tranquilizer Xanax, at a local Pharm Party, where kids bring prescription medicines (often their own meds or meds stolen from a parent), mix them in a bowl and take a variety of unknown medicines to get high. Erbes is currently in Area Substance Abuse Councils (ASAC) inpatient recovery program in Cedar Rapids for prescription drug abuse.

Parents need to be aware of the most commonly abused medicines to protect their teens from medicine misuse and abuse. In addition to prescription pain relievers and tranquilizers, prescriptions to monitor carefully include stimulants used to treat attention deficit hyperactivity disorder (ADHD), such as Adderall and Ritalin. According to Lukan, college students are more apt to misuse ADHD medicines in an effort to perform better on exams, while tweens are more apt to abuse Dextromethorphan, a cough-suppressant ingredient found in many OTC cold medicines.

An indicator Iowans are more aware of the risks of prescription drugs is the volume of prescription drugs subject to abuse collected through the Iowa Take-Back initiative, which includes biannual prescription drug drop-off events. Iowans returned nearly 8,000 pounds of unused or expired drugs during the April 2013 event, versus roughly 5,000 pounds for the September 2012 event. The next series of community Take Back events is scheduled for October 26.

Iowa parents are encouraged to not only talk to their own teens about proper medicine use, but also prevent more cases of teen medicine misuse by properly securing and disposing of medicines. For proper disposal at home, ODCP recommends removing identifying labels and mixing prescriptions with used kitty litter or coffee grounds in a plastic bag, sealing the bag and placing it in household trash.

ISAIC is a Cedar Rapids Public Library program funded by the Iowa Department of Public Health. ISAIC, a member of Substance Abuse Librarians & Information Specialists, provides individuals and organizations with educational tools to aid in the prevention and recovery of substance abuse. The Governors Office of Drug Control Policy improves the health and safety of all Iowans by promoting strategic and collaborative approaches to reduce drug use and related crime. To learn more about the Iowa Medicine TLC public education program, visit IowaMedicineTLC.org or call 866-242-4111.