Firdaus Kharas, a multi-award winning animation producer and director, is pleased to announce the creation of animated Public Service Announcements to provide an educational tool for those trying to reduce malaria infections in Africa. Initial funding of $ 25,000 is being provided by the Canadian Red Cross to support the project.

“During my travels in Africa, I have been struck by the fact that more children die of malaria than any other disease. I want to support the efforts of organizations like the Canadian Red Cross, which help prevent malaria through massive free net distributions in Africa,” says Director and Producer Firdaus Kharas.

“My colleagues and I will create a series featuring two animated female mosquitoes that highlight the importance of using bed-nets and other educational messages to help prevent malaria in a fun and engaging way. Creating a series of world-class animated spots will provide an important tool that can be easily and widely used by broadcasters, non-governmental organizations, hospitals, schools and others to educate vulnerable communities on how to protect themselves from malaria.”

Initially five spots will be created with a total of 30 spots planned, subject to funding. The series will be provided free-of-charge to any organization requesting to use them. A comprehensive website, http://www.bednets.ca, is being developed where copies of tapes and DVDs can be requested online. This campaign builds on the success of The Three Amigos, an animated HIV/AIDS prevention campaign supported by Archbishop Desmond Tutu, with 20 spots in 41 languages currently in use in 72 countries.

“We are very pleased to be able to partner with Mr. Kharas on this important initiative to prevent malaria infections, which will greatly complement our existing malaria prevention campaigns,” says Paul Wharram, Interim Secretary General of the Canadian Red Cross. “The distribution of nets is most effective when accompanied with a strong public education component. This will be a great supporting tool for local Red Cross volunteers in Africa to use during the distributions.”

In Africa, one child dies every 30 seconds from malaria. Each year, between 350 million and 500 million people are infected with malaria around the world. Even though malaria is preventable and treatable, it currently threatens over 40 per cent of the world’s population. The majority of deaths from malaria are young children and pregnant women in sub-Saharan Africa. There is no vaccine against malaria; the best defence is prevention.

Firdaus Kharas has been publicly acknowledged as a “world renowned” director and producer of animation, film and television media. His current work focuses on creating various types of media to affect societal and individual behavioural change through mass communications. These media initiatives have a universal appeal in that they span many cultures and countries to better the human condition.

The Canadian Red Cross works with Red Cross Societies in Africa to provide nets free-of-charge in some of the world’s most malaria-affected countries. Red Cross has delivered more than three million nets directly to families in Togo, Sierra Leone, Zambia, Niger, Mozambique, Malawi and Madagascar, thanks to the generous support of the Canadian International Development Agency and Canadian donors. 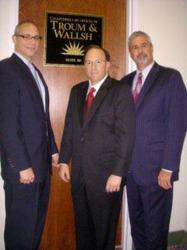 The family law attorneys at the Chartered Law Offices of Troum & Wallsh have extensive experience representing individuals in a number of family law matters, including dissolution of marriage.

According to the Orlando divorce lawyers at the firm, dissolution of marriage often requires a lot of paperwork that must be filed within a timely manner. The paperwork details the provisions involving matters such as property distribution, child custody, child support, spousal support and more.

Because these documents are binding and affect the future of the divorcing spouses as well as their children, it is important that each party completely understands and agrees with all the terms. If you are going through a divorce, the attorneys at the Chartered Law Offices of Troum & Wallsh can explain the process, draft the necessary documents, and clarify all the terms so you know exactly what to expect.

There are several issues that need to be resolved during a divorce. And, whether you are handling your divorce through mediation or family court, an experienced divorce attorney can make sure that your best interests are protected and can help you reach a resolution that you feel comfortable with.

If you are going through a divorce, or are considering divorce, you should speak with an experienced attorney as soon as possible to make sure you handle the process appropriately. The Orlando divorce lawyers at the Chartered Law Offices of Troum & Wallsh recognize the difficulty of these situations and will do whatever it takes to get you through the process as quickly and efficiently as possible.

The Chartered Law Offices of Troum & Wallsh represent clients throughout the state of Florida in a number of family law matters. The firm prides itself on being responsive to its clients and has earned a reputation for providing dedicated legal services from the initial consultation through to conclusion. The firm offers initial consultations for people in Orlando that are seeking divorce.

To schedule an initial consultation with an Orlando divorce lawyer, please call 1-866-433-1087.

With the increased need for consumer bankruptcy representation in greater Phoenix and throughout Arizona, the Pew Law Center has extended its free bankruptcy initial consultation service to residents needing protection from creditors. Those who take advantage of the centers free confidential sessions will meet individually with a bankruptcy attorney to discuss the availability of debt relief through Chapter 7, Chapter 11, and Chapter 13 filings. Each individual learns what legal options are available by meeting privately with a knowledgeable bankruptcy lawyer, one who fully comprehends the persons financial circumstances and knows precisely how the existing bankruptcy laws will apply.

If you can appreciate how deeply people suffer under unmanageable debt, then you understand how vital it is for them to get some free reliable legal guidance, said the law firms founder, Lawrence D Pew. So many of the people we help arrive at our doors feeling defeated and hopeless, continued Mr. Pew, giving them that free initial meeting with an experienced bankruptcy attorney is invaluable to them. Without it, they dont know where to begin setting things right.

By meeting with someone who has the answers to their legal questions, residents learn where to begin and what bankruptcy will and will not do for them. Some Arizona parents, for example, are under the mistaken belief that the court will eliminate their child support obligations through bankruptcy. Not so, says Mr. Pew, child support is not dischargeable in bankruptcy. If the person was planning to file for bankruptcy on his or her own, then that important legal detail would be something to know before filing, not after.

Most people are so overwhelmed with their financial plight, according to the Mesa law firms founder, theyre afraid to spend money on anything let alone an attorney, even if they desperately need to know how bankruptcy can help them get out of debt. To give those individuals a much-needed break, the Pew Law Center has decided to continue offering free initial consultations on bankruptcy until further notice.

Lawrence ‘D’ Pew is an experienced tax, bankruptcy, and transactional attorney, and founder and managing attorney of the Pew Law Center, PLLC, a leading Arizona tax and bankruptcy law firm focused exclusively on debt relief. With offices in Mesa, the law firm serves Arizona residents in the greater Phoenix area, including Scottsdale, Mesa, Tempe, Gilbert, and Chandler. A client-oriented law firm with a mission to always exceed client expectations, the Pew Law Center has helped over 2,000 people file for bankruptcy and eliminate over $ 100 million in debt.