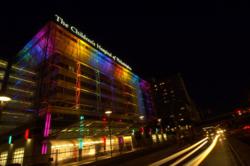 Performing delicate surgery in the womb, months before birth, can substantially improve outcomes for children with a common, disabling birth defect of the spine. Experts at The Childrens Hospital of Philadelphia (CHOP) co-led a new landmark study showing that fetal surgery for spina bifida greatly reduces the need to divert fluid from the brain, improves mobility and improves the chances that a child will be able to walk independently.

Spina bifida is the most common birth defect of the central nervous system, affecting about 1,500 babies born each year in the United States.

This is the first time in history that we can offer real hope to parents who receive a prenatal diagnosis of spina bifida, said N. Scott Adzick, M.D., Surgeon-in-Chief at The Childrens Hospital of Philadelphia, director of Childrens Hospitals Center for Fetal Diagnosis and Treatment, and lead author of a federally sponsored study reporting results of a clinical trial of fetal surgery for myelomeningocele, the most severe form of spina bifida. Adzick, who led a team at CHOP that pioneered fetal surgeries for this condition and set the stage for this clinical trial, added, This is not a cure, but this trial demonstrates scientifically that we can now offer fetal surgery as a standard of care for spina bifida.

Myelomeningocele is devastating, occurring when part of the spinal column does not close around the spinal cord, failing to protect it during stages of fetal development. Long-term survivors of the condition frequently suffer lifelong disabilities, including paralysis, bladder and bowel problems, hydrocephalus (excessive fluid pressure in the brain), and cognitive impairments.

Fetal surgery researchers have now reported long-awaited results from an unprecedented clinical trial that compared outcomes of prenatal, or fetal, surgery versus postnatal surgery, the conventional surgery for this disabling neurological condition. The study appears today in an Online First article in the New England Journal of Medicine: http://www.nejm.org/online-first.

How the Fetal Surgery Trial was Conducted

Three fetal surgery centers participated in the Management of Myelomeningocele Study (MOMS) trialat The Childrens Hospital of Philadelphia, Vanderbilt University, and the University of California San Francisco. The biostatistics center at George Washington University (GWU) served as the coordinating center and oversaw data collection and analysis, while the Eunice Kennedy Shriver National Institute of Child Health and Human Development sponsored the trial.

The MOMS study was a prospective, randomized clinical trial. One sign of its prominence is that all U.S. fetal surgery centers not participating in the trial agreed to perform no fetal surgery for spina bifida during the 7-year duration of the trial. The trial goal was to enroll 200 patients, but the NIH ended the trial in December 2010, after 183 surgeries had occurred, based on clear evidence of efficacy for the prenatal procedure.

Throughout the trial, women whose fetuses had been diagnosed with spina bifida contacted the trials coordinating center at GWU if they chose to volunteer for the study. That center randomly assigned half of the eligible women to receive prenatal surgery, the other half to receive postnatal surgery.

Postnatal surgery entailed delivery by planned cesarean section at 37 weeks gestation, after which the surgical team repaired the opening in the newborns spine, usually within 24 hours after birth. In prenatal surgery, done between 19 and 26 weeks gestation, the surgical team made incisions in the mother and her uterus, then repaired the spina bifida lesion while the fetus was in the womb. Mothers in this group stayed near the center for ongoing monitoring, then underwent delivery by planned cesarean section at 37 weeks, or earlier, because many of the babies in the prenatal surgery group arrived prematurely.

In both study groups, surgeons used the same technique to cover the myelomeningocele with multiple layers of the fetuss own tissue. This lesion leaves the spinal cord exposed, so its essential to protect this tissue from neurological injury, said study co-author Leslie N. Sutton, M.D., Chief of Neurosurgery at The Childrens Hospital of Philadelphia. Previous research had established that in myelomeningocele, amniotic fluid and other features of the intrauterine environment damage the exposed spinal cord.

Building on Decades of Research

Starting two decades ago, pioneering animal studies by Adzick and collaborators such as Martin Meuli, M.D. (now Surgeon-in-Chief at Zurich Childrens Hospital in Switzerland) showed that the timing of the myelomeningocele repair was important, a finding borne out by clinical experience in fetal surgery done before the MOMS trial. The damage to the spinal cord and nerves is progressive during pregnancy, so theres a rationale for performing the repair by the 26th week of gestation, rather than after birth, said Sutton.

The abnormal spinal development underlying myelomeningocele triggers a cascade of disabling consequences, including weakness or paralysis below the level of the defect on the spinal column. In addition, leakage of cerebrospinal fluid through the open spina bifida defect results in herniation of the brainstem down into the spinal canal in the necka condition called hindbrain herniation. Hindbrain herniation obstructs the flow of cerebrospinal fluid within the brain, leading to hydrocephalus, a life-threatening buildup of fluid that can injure the developing brain. Surgeons must implant a shunt, a hollow tube that drains fluid from the brain into the childs abdominal cavity. However, shunts may become infected or blocked, often requiring a series of replacements over a patients lifetime.

What the Study Found

The current study reports data on 158 patients who were followed at least one year after surgery. Clinicians who were independent of the surgical teams and blinded (not informed which of the two surgeries a given child received) evaluated the children from the study at one year of age and again at age 30 months.

–As with any surgery, fetal surgery carries risks. Fetal surgery in this study raised the risk of premature birth and scarring in the mothers uterus. Additionally, the surgical site in the uterus used for fetal surgery requi

Mystery shopping we have done at a number of casinos shows that many properties need to do a better job of taking care of guests who use the valet service, says Baird, president of Robinson & Associates, a guest service consulting firm for the gaming industry. For many guests, their first impression of a casino occurs when they drive up for valet service. Thats when casinos need to put their best foot forward and its not always happening.

Robinson & Associates will help valet employees learn the importance of quick and efficient service, proper attire, smiling, a warm greeting, using the guests name and making compliments about a guests vehicle. They also will gain insight into the importance of the last impression they make as guests leave the property.

The company will show valet staff members how to make such a positive impression that guests have a good feeling about the casino before they even enter, Baird says.

Valet service affects how a person feels when they walk in the door, Baird says. If a casino wants its guests to step inside smiling, valet service can make a huge contribution to that goal. Valets are the ambassadors of the casino at all times.

Robinson & Associates has contracted with Jason McNair of Agoura Hills, Calif., to provide the valet training. McNair has extensive experience in the valet field. He has been a valet supervisor for American Valet Company, working at upscale night clubs, restaurants and shopping centers. He has been a valet supervisor for C.P.S. Parking/Black Tie Valet, working at high-end restaurants, shopping centers and hotels and serving as a valet for Microsoft Corp. parties and company events. McNair also has provided valet and guest services at Hyatt Westlake Plaza in Westlake, Calif., the Viceroy Hotel in Santa Monica, Calif., W Hotel in Seattle and Westwood, Calif., and at The Grove, an upscale shopping center in Los Angeles.

If valet employees dont provide exceptional service to each and every guest, they could, in fact, be driving customers away, Baird says. Investing some time and training in the valet department can pay huge dividends.

Owned by Lydia and Martin Baird, Robinson & Associates, Inc., is a guest service consulting firm that provides specialty guest service training, management skills training, presentation skills training, team building programs and employee incentive and recognition programs for the gaming industry. Martin is author of Gaming Guest Service from A to Z, a book that uses the alphabet to help gaming executives, managers and employees understand the importance of outstanding guest service and how to provide it.

The Bairds have a Web site, http://www.casinocustomerservice.com, thats devoted to helping casinos improve their guest service so they can compete and increase revenues. Robinson & Associates may be reached by contacting Lydia at 480-991-6421 or at lbaird@casinocustomerservice.com. Robinson & Associates is a member of the Casino Management Association and an associate member of the National Indian Gaming Association.