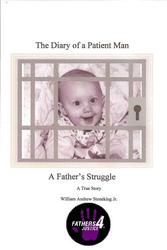 October 26th 2007 marked the one year anniversary of the release of Bill Stoneking’s book, “The Diary of a Patient Man, A Father’s Struggle” (LuLu Press, Oct. 26, 2006, ISBN: 978-1-4303-0198-1). As the past year has lapsed, exposure to the problems of domestic violence and child abuse that fathers and their children suffer in family court has brought positive response from readers, voters and families affected in Clay and Platte Counties in Missouri that wish to take action as well as significant responses from other jurisdictions across the United States.

In recognition of Domestic Violence Awareness Month and the ongoing problem of child custody interference by mother’s who make unsubstantiated claims of abuse against fathers to interfere with the parent-child relationship, author Bill Stoneking releases a LULU exclusive edition, “The Diary of a Patient Man, A Father’s Struggle F4J

More than ten years ago, George and Barbara Kadzis contacted Children’s Home Society of Florida (CHS) to get some information on adopting a child. Little did they know how dramatically their lives would change as a result of that call.

Originally, George and Barbara considered adopting an infant and contacted CHS as they were familiar with the organization’s rich history in finding permanent homes for children. But when they learned about a young Chinese girl with a cleft palate, they were compelled to bring her to America. Barbara, a teacher who was herself adopted, and George, a dentist, continued to work through CHS’ International Adoption Program to locate children with special needs, eventually adding a total of six children to their family, five of whom were physically challenged.

“This is such an exceptional family,” said Helen Ervin, Adoption Manager for the CHS North Central Division. “George and Barbara knew that these children would not have had adequate medical care if left in China. They would have grown up to be totally isolated from society because of their physical challenges.”

ABC’s Extreme Makeover: Home Edition crew learned about the family after their home had been ravaged by hurricanes and George had been diagnosed with brain cancer. This past February, the show’s crew arrived at the Kadzis home, where they spent a week rebuilding the house and making modifications to accommodate the challenges of the five physically challenged children.

Sunday evening, millions of viewers will tune into ABC where they will get to know the Kadzis family.

“Tragically, George was admitted to the hospital the evening before the family found out they’d been chosen for the home makeover,” noted Ervin. George passed away in March without ever returning to his home.

CHS, which focuses its work on finding parents for children, not children for parents, finalized a record 1,090 adoptions during the 2007/2008 fiscal year of which 1,019 were public adoptions involving children from foster care.

Since Children’s Home Society of Florida’s founding in 1902, adoption has been a cornerstone of the nationally accredited organization’s broad spectrum of services to children, parents and families. To date, more than 35,000 children have found their forever families through CHS.

Founded in Jacksonville in 1902, Children’s Home Society of Florida (CHS) is the third largest private not-for-profit serving children and families in the United States and Canada accredited by the Council on Accreditation. CHS was a founding member of the Child Welfare League of America, and was instrumental in helping to pass Florida’s first laws protecting children. Services include foster care, adoption, child abuse prevention, emergency shelters, residential group homes, independent and transitional living for teens, early education and care, parent education, counseling, mentoring, and treatment for developmentally disabled children. CHS, which served more than 86,000 children and families in 2007-2008, is headquartered in Winter Park, Fla., has 14 divisions and employs more than 1,900 staff who are dedicated to providing child-focused, family-centered care.

Personal health record (PHR) provider ZweenaHealth.com recently received mention in the Health and Wellness section of the February 2012 edition of Scholastic Parent & Child magazine. The article in the Click this! column of the editorial highlighted Zweena as an online PHR service that helps families by collecting medical records from various providers and assembling them in one safe place for easy access. Zweena LLC is a provider of online PHR and health information technology services that assembles patient medical records directly from doctor’s offices, organizes and digitizes them to create an electronic health record that provides updated health information that is safe, actionable, and easy to understand, manage and share.

Published by Scholastic, Parent & Child Magazine highlights family-oriented topics such as activities and crafts, children’s health and wellness, development, family recipes, daycare, nursery, preschool, and elementary school, reading, testing, and others. Zweena is a provider of online PHR solutions for families, and was featured in the “Click this!” column of the health and wellness editorial of the February 2012 edition of the magazine.

The column focused on how the Zweena service helps families by collecting family members’ medical histories from medications to tests, lab results, and surgeries, and assembling them into a digital health record. The article also explained that families can go on to access the files from their home computer and share the information with family doctors and pharmacists as they choose.

The article concluded by explaining how Zweena also benefits families by keeping all the information in one secure place to save precious time during medical emergencies and also by helping to protect against medication mistakes.

The reference to Zweena can be found on page 50 of the February 2012 print edition of Scholastic Parent & Child.

Zweena continues to be recognized as a trusted and people-centered online PHR solution that is poised to revolutionize the way people see PHRs and how they use them on a day-to-day basis, says CEO John Phelan.

Zweena’s online PHR and service provides patients and providers with a secure, private and easy-to-access platform that offers a truly comprehensive accurate online personal health record. By minimizing stress and error and presenting useful health information in a clear and actionable way, Zweena allows patients to really be in control of their health information, and makes it possible for providers to access updated and accurate information that saves human life, critical time and unnecessary costs.

The Zweena service can be accessed at ZweenaHealth.com, and is available as a 60-day free trial. To learn more or get started, please visit zweenahealth.com/free-trial/, send an email to info@zweenahealth.com or call the Zweena help line on 877-848-4248 for more information.

Zweena empowers patients, their families and healthcare providers to get the best care and make the best health decisions proactively. Zweena achieves this by collecting patient medical records, assembling and storing them with Microsoft HealthVault, and delivering an online personal health record that is safe, private, and easy to access and share at any time, and from any place. Zweena provides you with an easy and structured way to access and store your personal health record, helping you to make sense of it all and always keeping your vital health information within reach during those critical moments in life.

Absolute Rights, the freedom fighting news and opinion site, has issued its newest Digital Newsletter and sent it to the tens of thousands of subscribers who receive the biweekly collection of online articles.

The main article comes from guest contributor Kevin Jackson, and covers the idea of President Obama being Americas father.

By now you likely have heard that Chris Rock considers Barack Obama to be Americas father, Jackson wrote. If that is true, then would somebody call Child Protective Services and find us foster parents?!

Jackson is a radio show host and bestselling author of Sexy Brilliance and Other Political Lies. A highly-sought national speaker and consultant, Jackson writes for TheBlackSphere.net and Big Government.

Contenders Corner is the Newsletter section focusing on political issues within the Beltway, and this editions article was contributed by Karl Dobias. The article compares the current Congressional makeup with a summer music festival lineup.

Now, in the grand scheme of things, Congress is nothing like a music festivalold white guys talking and, more often than not, disagreeing with each other when it comes to decisions on bills and policies, versus a two to three day outdoor music and arts festival that celebrates expression, love, and music, Dobias wrote in the article. But what do these two seemingly opposite things have in common? Disappointment!

The Crisis Ops article was contributed by SurvivalLife.com Managing Editor Above Average Joe, who shares his recent bulk trash experience. While emptying his home of junk he didnt need, he saw firsthand the ingenuity and practicality of some wise trash pickers.

As I began toss my unwanted items out on the curb I witnessed a live action version of the old adage One mans trash is another mans treasure. There were some items that were gone before I even made it back with another armful, Joe wrote.

The last section of the Newsletter is the Global Watch article, which was written by Grady Kerr. The subject of the article is Maureen OConnor, the widow of the Jack in the Box founder who has gambled away her inheritance.

Prosecutors said her gambling activity exceeded $ 1 BILLION over the period 2000 2008. This money was lost from mostly playing video poker in casinos, wrote Kerr. Shes charged with money laundering as she took this gambling money from the R. P. Foundation, the nonprofit foundation her husband started and she managed.

The Absolute Rights Newsletter is sent to thousands of Absolute Rights email subscribers as part of the never-ending effort to bring relevant and captivating content directly to readers. Newsletters are distributed via email and the articles then appear online at AbsoluteRights.com.

Absolute Rights is the fastest growing news and opinion site on the web. It is providing content and insight on the hottest topics circulating through the web and beyond. For more information on the site, go to AbsoluteRights.com.