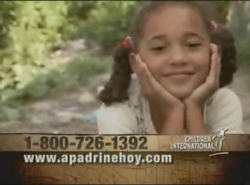 The U.S. Department of Treasury announced last month that eventually it will provide all federal benefits through direct deposit, including payments to more than 8 million workers receiving Social Security Disability Insurance (SSDI) benefits. Making certain recipients understand the costs and benefits of their choices is essential for a smooth transition, according to Allsup, a nationwide provider of http:// SSDI representation and Medicare plan selection services.

Effective May 1, 2011, paper checks no longer will be issued to individuals applying for benefits. Instead, applicants must choose either direct deposit into a bank or credit union account or deposit onto a Direct Express

Working in any part of military entails lots of responsibilities. Military men and women adhere to the duty of protecting the country even if it means they might lose their life. Due to the danger and perilous circumstances that military service members face, getting an adequate life insurance policy is a necessity.

The military offers a Service members’ Group Life Insurance (SGLI) program, but it is a low cost insurance that covers the basics. SGLI benefits are sometimes not just enough cover the needs of the solder’s loved ones. SGLI only amounts to $ 50,000 up to $ 400,000 in coverage, which is definitely not adequate enough for the needs of soldiers that have families with young children, as well as soldiers who have substantial debts that will need to be paid off if they should die. Many service men and women worry about how their children will be able to afford college if they die. Securing their child’s future is one main reason why many military service members choose to have a supplementary private term life insurance. Many military service members want to supplement with another insurance plan, to ensure that their family will have plenty of money to cover their debts, their funeral expenses, and still have some left over to take care of their family for many years.

A supplementary private term life insurance is also ideal because the plans are affordable and military service members can be confident that their families will be compensated appropriately in case they die. While these men and women are away from their families on active duty, they will have the peace of mind knowing that their insurance coverage will be enough to adequately take care of the needs of their families.

Typically private insurance coverage can equal up to 20X the proposed isureds annual income and the military service member will be able to maintain the insurance even if they retire or leave the military. Lifeline Direct Insurance Services is working with multiple insurance carriers to ensure that the men and women of the armed forces and families alike are protected with generous and affordable term life insurance coverage. To get a term life insurance quote, visit the agency website at http://www.lifelinedirectinsurance.com or call toll free 877-805-9624.

As a leading nationwide retailer and distributor of gear and equipment transportation solutions for vehicles, ORS Racks Direct is proud to announce the launch of a new division specializing in child, baby and infant newborn transport solutions. With the recent acquisition of Chariot Carriers by the Thule Group, parent company of Thule Racks, ORS is strategically positioned to offer the entire product line from Chariot Carriers, widely regarded as the industry’s safest and most advanced child carriers available on the market today. Featuring a uniquely engineered modular design, each basic carrier (also called a chassis) can easily combine with any of the various Chariot CTS Conversion Kits. The result is a single child carrier that can serve as a baby jogger, baby stroller, child bicycle trailer, ski pulk shuttle or hiking tow-behind trailer. Many accessories are also available for enhanced comfort and ease of use.

“When we were informed late last year of the Thule Group acquisition of Chariot Carriers, we recognized immediately the brand symmetry both Thule Racks and Chariot share,” states Catherine Case, ORS Racks Direct Consumer Relations and Sales Coordinator, “Thule Racks is a lengendary provider of very safe and reliable transport solutions for outdoor gear and equipment. Likewise, Chariot is widely recognized as the most trusted name in safe, reliable and high-performance transportation solutions for children, babies and newborn infants. Now we can easily offer both brands side-by-side to our customers.”

ORS Racks Direct is a closely held enterprise focusing on complete sales and service of car and truck rack systems. Representing the industry’s most respected manufacturers, including Thule Racks, SportRack, TracRac, Inno, Yakima Racks and Whispbar, RockyMounts and Saris, the company provides high quality car and pickup truck rack, cargo box, ski-snowboard rack, kayak-canoe rack, surfboard-sailboard rack and bike rack solutions. Additional divisions include luggage by Thule and child carriers by Chariot and Croozer. The company has been offering consumer sales for over three decades to the U.S. market through multi-channel outlets that include store front, phone sales and internet. Their full line of Chariots and accessories is available for review at ORS Racks Direct – Chariot Carriers (http://www.orsracksdirect.com/chariot-carriers-baby-joggers-strollers-ski-pulks.html).

The informative and innovative infographic can be seen by visiting http://www.matrixdirect.com/about-us/insurance-education/is-your-job-killing-you. By sharing the infographic on Social Media or blogs, consumers can help Matrix Direct spread the word about Americas most dangerous jobs.

The new infographic illustrates that work-related accidents and mishaps are a leading cause of death in the United States every year. According to the U.S. Bureau of Labor Statistics, 4,547 Americans died on the job in 2010. Thats 23% less than 2000, when 5,915 people died at work, but still an alarming number of work-related deaths.

The statistics also mean that in 2010, about 3.5 workers died for every 100,000 people who are employed in the United States. While the odds of dying on the job are not as great as being killed in a car accident or in other more common causes of death, work-related deaths still claim thousands of Americans every year.

People who work in one of the top 10 most dangerous jobs or in other professions that are equally as dangerous do have options. And it doesnt have to mean getting a new and safer job, either.

Purchasing a term life insurance policy can be a great way to help financially provide for a spouse, child, or other loved ones long after a policyholder dies in a work-related accident. For less money than most people spend on coffee or cable television each month, workers can help protect their familys financial future with affordable and reliable term life insurance.

In some cases, workers in dangerous professions may be excluded from buying term life insurance, due to the higher-than-normal risks of death associated with their work. For those workers, an Accidental Death and Dismemberment Insurance policy might provide some type of financial protection against serious injury or death in on-the-job accidents.

uKnow.com, Inc., a provider of parental intelligence solutions, today announced that BeanStalk, LLC (http://www.abeanstalk.com), a direct selling organization focused on child safety products,is using its technology to power BeanStalks offerings. uKnow.com’s technology will enable BeanStalk customers to have a bird’s eye view of what is going on in their child’s digital world so that they can keep their finger on the pulse, and when necessary, take action to protect the safety and privacy of their children.

uKnow.com’s enterprise platform product, called FamilyConnect.net, is the only commercially available offering that merges social network, mobile phone and location monitoring into a single consumer product which can be private-labeled by companies. Using FamilyConnect.net, companies such as direct selling organizations, home security providers, cable providers, wholesale club stores, and more can offer a value-added service without the need to invest in additional infrastructure.

uKnow.com will power the front-end BeanStalk website, all subscription management, billing, payment processing, reporting, analytics and technical support. BeanStalk independent business owners, known as Advocatesnwill have the opportunity to offer a free version of the service and sell upgraded versions of the service ranging from only $ 4.95 per month to $ 19.95 per month. The free version enables Advocates to provide a valuable service to their community while also extending their networking opportunities.

We are extremely enthusiastic to add BeanStalk to our growing list of enterprise clients, since their focus on child safety issues aligns so well with our companys mission, said Steve Woda, CEO and co-founder of uKnow.com Partnering with uKnow.com is a very natural fit for any direct selling organization because todays parents are actively looking for solutions to the parenting challenges technology presents. You cannot watch television for more than a few minutes today without the topic of cyberbullying, sexting, or online predators coming up. The current environment creates a tremendous opportunity for direct sales organizations with the foresight to grow their businesses while helping to address these important social issues.

Every parent wants and needs more transparency into their childs digital life, but would like to achieve it in a noninvasive and constructive way. We are excited to use uKnow.com to power our BeanStalk service offerings that help parents simplify the task of monitoring their kids technology use, said Hannah Masters, CEO of BeanStalk. uKnow.com managed the entire process of getting the service up and running, which allowed us to stay focused on our area of expertise — sales and marketing.

Founded in 2009 and headquartered in Arlington, Va., uKnow.com is the only parental intelligence system available for both private-label and consumer use. The company powers the world’s leading Parental Intelligence Systems including uKnowKids.com, http://www.kidsafe.me, and http://www.SafeCyberKids.com, among others.

uKnow.com works with companies and organizations to help parents protect their kids from child predators, sexting, and cyberbullying with a special focus on the social networks and mobile phone. uKnow.com provides parents with a bird’s eye view of what is going on in their child’s digital world so that they can keep their finger on the pulse, and when necessary, take action to protect the safety and privacy of their kids. You can find uKnow.com on Twitter (@uknowkids), on Facebook, or follow our blog at http://www.uknowkids.com. 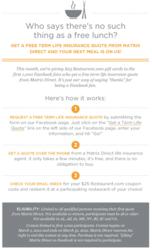 Consumers can visit Matrix Directs Facebook page to enter the promotion. Entry information and contest rules can be found on the Facebook pages Contests & Promotions tab.

The first 1,000 people who Like Matrix Direct on Facebook and receive a free, no-obligation quote from a Matrix Direct agent this month will get a $ 25 Restaurant.com code. Consumers may then redeem their coupons at participating restaurants of their choice.

In addition to dispelling the common notion that theres no such thing as a free lunch, Matrix Directs new promotion encourages people to take the first step toward protecting their financial futures.

Buying a term life insurance policy can be a great foundation on which to build a solid financial plan and a great way to help financially provide for a spouse, child, or other loved ones. For less money than most people spend on coffee each month, consumers can help protect their familys financial future with affordable and reliable term life insurance coverage.

Matrix Direct, one of the nations top direct-to-consumer term life insurance agencies, this month is offering its Facebook fans the chance to win a digital camera in an online photo contest.

The companys “Picture Those You Helped Protect” contest encourages consumers to proudly display photos of the spouses, children and other loved ones they helped protect by purchasing term life insurance.

Buying a term life insurance policy to help cover a familys living expenses and other costs in the event of a sudden or unexpected death is a big step in life. Matrix Direct thinks consumers should be proud about helping provide for their loved ones with term life insurance.

Entering the Matrix Direct “Picture Those You Helped” Protect photo contest is free and easy to do. In order to enter your photo, simply: