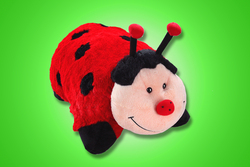 It has been said that imitation is the sincerest form of flattery. The manufacturers of the wildly popular My Pillow Pets 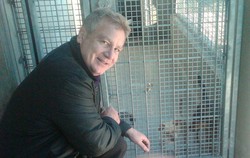 When Richard Maize is not helping the homeless in LA, he can be seen assembling beds for stray dogs and cats at the Los Angeles Animal Shelter.

“My wife Rochelle and I are proud to have donated 69 beds to stray dogs and cats which are awaiting caring homes,” says Richard Maize.

“We trust that our actions here today will serve as an inspiration to many others in helping these loyal, intelligent, four legged friends of ours who are responsible for protecting our homes, making sure that they are clean and providing us and our children with an abundance of unconditional love.”

“Thousands of dogs in animal shelters across the country sleep on cold, wet, concrete floors 24 hours a day, 7 days a week. Cats in cages have little alternatives to sleeping in their litter pans,” says Richard Maize.

Richard Maize is a proud pet owner taking care of several dogs and cats over many years.

He owns two pets today – a Shiatsu dog and Himalayan cat. Maize recently lost a young, 4 year-old Yorkshire Terrier named Penny to brain disease that he says still brings tears to his eyes when thinking about her.

“We contacted Kuranda USA, a small manufacturing company based in Annapolis, Maryland. They provide “chewproof” designs for kennels, shelters and chewing puppies. These beds are soft, off the floor providing comfort for dogs and cats of all sizes for many years. They are easy to clean and deodorize.”

Richard Maize states: “These beautiful dogs and cats provide us and our children with protection, companionship and unconditional love. The least we can do is make sure that they are safe, comfortable and being cared for in the best and most professional manner.”

According to the National Council on Pet Population Study and Policy there are about 5,000 community animal shelters in the US that are independent; there is no national organization monitoring these shelters. The terms humane society and SPCA are generic; animal shelters using those names are not part of the ASPCA or the Humane Society of the United States.

Currently, no government institution or animal organization is responsible for tabulating national statistics for the animal protection movement. Approximately 5 million to 7 million companion animals enter animal shelters nationwide every year, and approximately 3 million to 4 million are euthanized (60 percent of dogs and 70 percent of cats).

Shelter intakes are about evenly divided between those animals relinquished by owners and those picked up by animal control. These are national estimates; the percentage of euthanasia may vary from state to state.

According to the National Council on Pet Population Study and Policy, less than 2 percent of cats and only 15 to 20 percent of dogs are returned to their owners. Most of these were identified with tags, tattoos or microchips.

Twenty-five percent of dogs who enter local shelters are purebred.

Only 10 percent of the animals received by shelters have been spayed or neutered. About 75 percent of owned pets are neutered.

According to Ralston Purina and NCPPSP, the majority of pets are obtained from acquaintances and family members. About 15 to 20 percent of dogs are purchased from breeders, and 10 to 20 percent of cats and dogs are adopted from shelters and rescues.

More than 20 percent of people who leave dogs in shelters adopted them from a shelter.

“This bed for pets thing was not my idea nor was it even on my radar as possible donations for me and the Rochelle and Richard Maize Foundation. A dear friend of mine called me and asked if I would be interested in donating some money to give dogs and cats specially designed beds so that they would not have to lay on cold concrete while waiting and hoping for a good home,” says Richard Maize.

“After waiting for three weeks after the order of these special beds, they finally arrived. My friend and I couldn’t wait until we drove up to the West Los Angeles Animal Shelter to see that the caged dogs were in fact on the beds. Someone else donated blankets to be placed on these beds. Many of these dogs found the beds in their spacious cages and where happily laying there when we arrived.”

“Two of the LA animal shelter volunteers had tears in their eyes as they came over to hug me. They told me how grateful they were and what a difference it had made to the well being of the dogs and cats during these cold months.”

April 22, the government has implemented a no-go law punishable by fines or imprisonment [1].

This policy has reportedly blocked access by private Animal Search and Rescue teams many of which have documented wide-spread starvation of the companion animals, pets, and livestock within the TEPCO exclusion zone.

Concerned citizens held a protest in Tokyo on May 8th, starting in the “Hachiko” Square and ending at TEPCO offices [2].

On May 5th, PETA has issued an action alert which in part states [4]:

“Please urge the Japanese government to take immediate action to transfer farmed animals inside the 20-kilometer no-go zone to facilities where they can be cared for or to euthanize any animals who are suffering.”

PETA also provides a form email for readers to send:

“I was shocked to learn that the Japanese government has yet to take action to end the suffering of the estimated hundreds of thousands of farmed animals in the no-go zone around the Fukushima power plant.”

@0:00: The video opens in a parking lot with a skittish dog looking cautiously at the rescuers.

A geiger counter sounds a warning, not just of detected radiation particles, but a warning that the animal rescue team is being over exposed to radiation.

The skittish dog approaches food scattered on the ground and begins eating.

Behind the car, a team member can be seen kneeling down to calm yet another dog on a leash.

Speaking of the leashed dog: Well take you with us and hope well find the owner.

The team takes note of the dog and GPS location in order to find the owner.

Referring back to the skittish dog: Ok thenSee you next time then. You have to stay alive, ok?

@3:49: The team stops on a street in the middle of town. Piles of dog food can be seen in the street. Barking dogs can be heard inside the empty apartments along the street.

There are so many dogs barking. Urging his team to stay calm in the face of twenty or more dogs stranded in houses and potentially starving, the man says: Everyone, stay strong Well come back again.

@5:54: The team is back in the car driving through town. Dogs are wandering past on the street. Lets throw out lots of food. Everyone [the dogs] are waiting look. Stay strongYou tooPoor dogs

Other passenger: Throw the food out..More and more

Woman: Give a lot of food, we wont be able to feed them for a whileWe dont know when we can come back again in this situationJust give everything out.

The camera pans to the back seat, past the driver who is wearing a white radiation protective suit and googles. There are three dogs sitting in the back seat. Hey you guysWe are taking you guys with us, ok?

The scrolling title indicates this video was taken on April 22, 2011.

In yet a third video entitled “SOS Fukushima animals,” a Fukushima prefecture citizen has released a desperate plea of help, worried the animals may be starving and pleading for the government to provide rescue and shelter.

[The citizen bows to the camera. Reading from prepared notes, the citizen begins:]

Hello to everyone all over Japan. I am Meiko Yoshida, living in Odaku-ku, Minami Soma-shi, Fukushima-ken. My residence is at 17 km of the power plant.

March 11, 2011, the area was hit by the Eastern Japan mega earthquake as well as the tidal wave, followed by a series of accidents at TEPCO. The entire area of Odaka-ku, where we live, is within the 20 km radius. On March 12, the next day of the earthquake, TEPCO issued a voluntary evacuation order to Odaku-ku, which I was not aware of at the time.

The following day, on Sunday, March 13, I went to Odaka Ward Office, where I was told to evacuate immediately. The faces of the personnels then at the office were all devoid of expression like zombies while they worked. They knew what really happened in the power plant, that something horrible [had] happened, that is why their faces became like zombies.

Even though I was told to evacuate immediately, since I had nine cats to take care of at home, I had not been able to evacuate immediately. Several days later, on March 19, the Self-Defense Force members and the Ward Office personnels visited my home to persuade me to evacuate. I was told to leave the pets behind, and I left without them. At the time, I made a mistake of releasing my inside-living cats outdoors. I didnt have a mobile phone. I regret not having been able to consult with others who were in the same situation as myself.

Even at the evacuation center though, I was worried about my cats at home, so from March 19 until the midnight of April 21, I went back home every other day or two days to feed them food and water. During that period, six out of nine cats I released [had] been found and I have asked animal protection groups to look after them. One of the nine [has] died of a disease, and still now there are two remaining whom I have not been able to protect yet.

In the a.m. of April 21 it was just so sudden I heard that the 20 km area would become a severe cautionary zone. Before when I asked around when the off-limit will take effect, no one ever told me, but a bad news like that happened suddenly. Out of excessive worry, at around 23:00 on April 21, I went home but I was unable to provide them for protection. The cautionary zone became effective starting April 22, so I could no longer go back to my house. I had been asking the police officers at the checkpoint how I can get inside, [and they] told me that I need to obtain a permit from the city mayor, so I also went and appealed directly to the city mayor. So I went back and forth between the citys municipal office and the public health department, and asked to be permitted inside the zone, but it just could not be done.

The other day, on April 28, the public health department went inside the 20 km zone for the purpose of doing research; however this was for inspection only, so they could pick up wandering animals from the road. But no helping hand was extended for the cats and dogs who were left inside homes. When you rescue animals, time allowance is needed to carry out the task, but being told it starts tomorrow so suddenly, I was not able to carry out rescue.

At evacuation centers, there are MANY people who were told the same way and could not even prepare for evacuation, nor could they take their pets with them to evacuate. Those people are so worried about their pets living without them, their heartache is so severe that they cant sleep for nights; they cant even eat