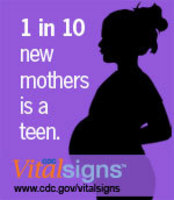 During the past 20 years, the rate of teen girls having children has dropped by about 40% to its lowest level since records began being kept 70 years ago. Having a child during the teen years carries high costsemotional, physical, and financialto the mother, father, child, and community.

Though we have made progress in reducing teen pregnancy over the past 20 years, still far too many teens are having babies, said CDC Director Thomas R. Frieden, M.D., M.P.H. Preventing teen pregnancy can protect the health and quality of life of teenagers, their children, and their families throughout the United States.

Contraceptive use is lowest and teen childbirth is highest among Hispanic/Latinos and non-Hispanic blacks. Rates also are high among youth of all races and ethnicities who are socioeconomically disadvantaged. Black and Hispanic teen girls are about 2-3 times more likely to give birth than white teens. The percentage of black teen girls ever having sex (58 percent) is higher than for Hispanic (45 percent) and white teen girls (45 percent). The percentage of black teen males ever having sex (72 percent) is greater than that of Hispanics (53 percent) and whites (40 percent).

According to CDC Vital Signs, teen childbearing has a high cost emotionally, physically and financially for the mother, child and their community.

Teen pregnancy and childbirth cost U.S. taxpayers an estimated $ 9 billion each year, approximately $ 6 billion in lost tax revenue and nearly $ 3 billion in public expenditures. Reducing teen and unintended pregnancy is a key priority for the Department of Health and Human Services and the focus of a collaborative effort involving many parts of the Department. In support of this effort CDC recommends:

Sex education that provides accurate information and is tied to the developmental needs of adolescents.
Parents and teens communicate more effectively with each other on issues of sex and teen birth.
Sexually active teens have access to affordable and effective birth control.