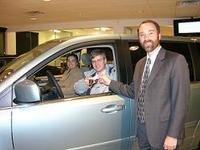 To celebrate the arrival of the all new 2009 Volkswagen Routan, Bernardsville Volkswagen gave away a two year lease. During the months of September and October, there were more than 700 entrants vying for the prize. “On October 16th 2008, at their new facility in Bernardsville, New Jersey, owner Tony Altomare drew the grand prize winner of the contest, Christopher Wohleb of Berkley Heights, New Jersey.” He entered online at Bernardsvillevw.com by filling out the contest entry form. The witness to the event was France Delle Donne, Director of Development for the Morristown Partnership from Morristown, NJ. There were ten other winners in the event who received a free car detail, free oil change, or free bluetooth for their vehicle. Other winners include: Thomas Taveroni, Joan Bobinski, Melissa Defreest, Anthony Petrucci, Alex Lombard, Christopher Braun, and George Chalsen each of whom won a bluetooth for their car. Lorraine Del Monte won an oil change. Carolyn Cuda and Annita Chiariello each won a complimentary detail.

The 2009 Volkswagen Routan is one of the newest members in its expanding family and adds to the other new models this year that include the Volkswagen CC, Jetta Sportwagen, Jetta TDI and Tiguan.

The Routan is the only seven passenger vehicle in Volkswagen’s lineup. “The sleek European design and dynamic sporty European engineering is the perfect choice for drivers who need a van but still enjoy driving.” The German inspired performance will satisfy the inner child, while the all-wheel ABS brakes and traction control will help protect all vehicle occupants.

Volkswagens have been sold at this location since 1952; that makes it one of the most recognized Volkswagen dealerships in the state of New Jersey. Under new ownership, since June of 1994, Bernardsville Volkwagen has become the largest Volkswagen dealer in New Jersey. August of 2006 marked another milestone; an expansion and a total makeover took place. With the owner’s personal input on the design, the showroom has achieved that warm feeling and elegance not found in any other Volkswagen store. The state-of-the-art facilities have become a benchmark in comfort and convenience.

Bernardsville Volkswagen is centrally located on the border of Somerset County and Morris County, just 10 minutes south of Morristown, NJ. The three incentives that Bernardsville Volkswagen offers exclusively are Free Tires for Life, Free Loaner Cars with every service and Free maintenance on all 2009 models. Bernardsville Volkswagen’s Service department consistently maintains their # 1 ranking in customer satisfaction throughout the entire state of New Jersey. Once you step into their state-of-the-art facility you will feel confident you’ve chosen the right dealer.